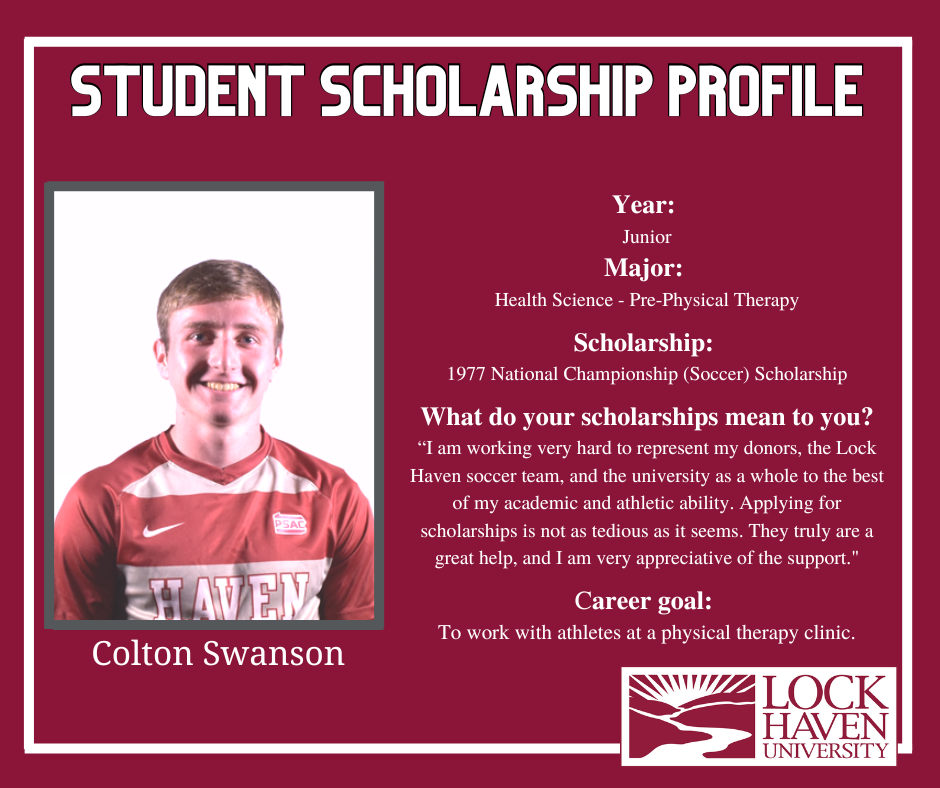 Lock Haven men's soccer player Colton Swanson, of Bradford, is the recipient of Commonwealth University - Lock Haven's 1977 National Championship (Soccer) Scholarship for the 2022-23 school year. Swanson is a junior health science major with a concentration in pre-physical therapy. He is also pursuing minors in psychology, and community and public health education.

"I'd like to congratulate Colton for his efforts both in the classroom and on the pitch that have led to the distinction of earning the 1977 National Championship Scholarship," said Bashar W. Hanna, president. "I wish Colton much continued success in all of his endeavors."

"I love the fact that everyone is so passionate about the university," Swanson said. "There's no denying that Lock Haven professors want to teach you, get to know you and want to see you succeed."

Swanson, a midfielder, also lauded head men's soccer coach, Patrick Long '08, as someone responsible for attracting him to The Haven.

"In the recruiting process, Coach Long was someone I discovered I really wanted to play for," Swanson said, "Coach Long does a great job creating a team-like environment, which is exactly what I was looking for."

The 1977 National Championship awards up to $2,000 annually to a Lock Haven soccer player with demonstrated leadership skills on the field, in the classroom, and around the community.

The financial assistance afforded by his scholarship helps him purchase textbooks and other class materials. Swanson said he would have to work during the semester without the scholarship. The extra time he has due to the scholarship gives him more time to focus on mastering his academic and athletic pursuits. This season, he has posted two goals and four assists for the Bald Eagles.