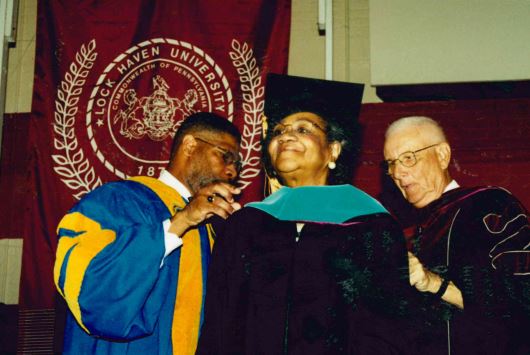 Not just through her son, Council of Trustees chair and 1971 Lock Haven State College graduate Daniel Potter Elby, and not just through the 23 young African American lives she changed by helping them gain acceptance to and graduate from Lock Haven University.

Nearly five decades after Daniel graduated from LHSC and Vivienne’s special bond with Lock Haven University began, her legacy as a mother to all and believer in higher education’s ability to transform young African American lives continues making a difference through the endowed scholarship established in her name.

Daniel established the Vivienne Potter Elby Scholarship in his mother’s honor in 1993 and it has been awarded every year since. In 2001, Vivienne also received an honorary doctorate of public service from LHU President Craig Willis at Spring Commencement. She received the degree for her decades of selflessness as she tirelessly dedicated herself to recruiting African-American students to LHU, while also helping them academically on their journey to becoming graduates.

Many of those 23 students she led to LHU came back to celebrate the honor with her. On that day, Daniel was also honored with the privilege of being commencement speaker. The theme for his speech was a consummate message of togetherness and community; echoing the same values instilled in him by his mother throughout his life.

“She took care of everyone,” Dan said. “If a kid never knew what a mother’s true love was, I know that they would want to have a mother like mine. She would do anything for anyone.”

When Daniel came to Lock Haven in 1967, he was one of just five black students in his class and one of just 10 black students in total. Although he was in love with the beauty of the area, he questioned if LHSC was the right place for him. His mother’s encouragement and wisdom gave him the strength to stay.

Daniel was recruited to LHSC by coach Hubert Jack to play running back and linebacker for the football team. As a student, he was one of the founders, and first president, of LHU’s Black Student Union. Along with friends, he then started a column in the Eagle Eye that highlighted African-American contributions to American society. Many of his white friends questioned why the column was necessary.

During his junior year, he decided to run for class vice president. He had doubts that he would win. It was more an effort to gauge whether or not his friendships with white peers were genuine. Much to his surprise, he actually won.

“If I would’ve known I was going to win, I would’ve run for president,” he said jokingly.

Daniel also met his wife Brenda Jones Elby ’73 while he was a student. Following Daniel’s life changing experience at LHSC, Vivienne made it her mission to help other black students from the Harrisburg area focus on bettering their futures by attending universities like Lock Haven and others.

The Vivienne Potter Elby Scholarship awards $1,700 annually to an African American student at LHU experiencing financial need. The student must enter sophomore year with at least a 2.5 GPA and preference is given to students from the Harrisburg and York Area.

As an endowed scholarship, anyone can make a contribution to support and reinforce the wonderful legacy of Vivienne Potter Elby, while also helping to transform young African American lives. Anyone interested in making a donation to the Vivienne Potter Elby Scholarship visit www.givetolhu.com to make a donation or  contact Major Gift Officer Jeff Ross at jtr1152@lockhaven.edu or by phone at 570-484-2364.