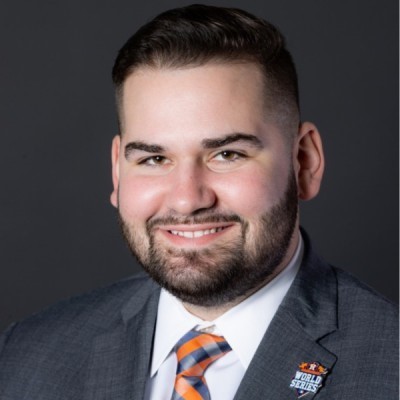 A baseball player may wait decades to be part of a team that wins the World Series. For Jacob Padelski, a 2017 Lock Haven graduate, his wait was a lot shorter.

Hired by the Houston Astros in August 2021 as an account executive, Padelskibecame a World Series Champion when the Astros defeated the Philadelphia Phillies to win 2022 World Series crown.

Padelski, of Hazleton, earned a bachelor's degree in sport administration and a minor in coaching from Lock Haven. During his time at The Haven, he was an active member of the Sport Administration Society as well as Alpha Sigma Phi fraternity.

"I chose LHU due to the reputation of the sport administration program as well as it being close to home and the beautiful surrounding areas," Padelski said. "The sport administration program is one of the best in the country. All the professors at Lock Haven certainly helped me get to where I am one way or another. I highly recommend the program to any high school students considering getting into sports."

In his role as account executive, Padelski manages more than 400 season ticket holder accounts, speaks with clients daily about securing their season tickets, plans group outings for companies, fills premium seating areas of Minute Maid Ballpark, and above all, connects people to the game they love - baseball.

"As a lifelong sports fan, it was always a dream to be a part of a championship organization. Winning the World Series is a feeling like no other," Padelski said.

Padelski said networking is key to success in the industry and encourages current students to take advantage of networking tools like LinkedIn. "Do not be discouraged after not hearing back from certain jobs, never stop applying and dream big," he said.