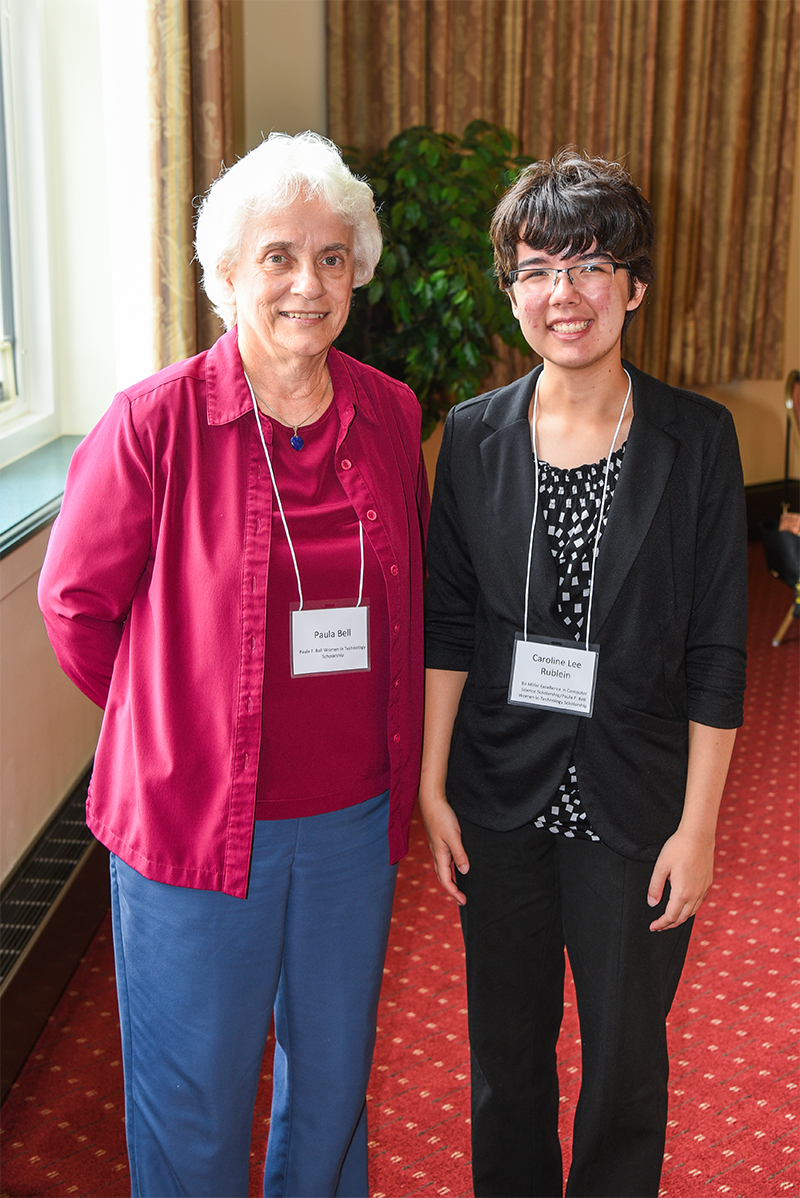 Retired professor Paula 'Sandy' Bell with a past Women in Technology scholarship recipient at the James C. Reeser Scholarship Brunch.

“If you can help other people, then you should,” Bell said. “It feels good to be able to make a difference.”

The daughter of a World War II Naval veteran, with a proud family history of military service, Bell wanted to provide a scholarship for a population of students she said often gets overlooked.

“All scholarships are needed, but there’s one scholarship (ROTC) that I never really hear people talk about,” Bell said. “I don’t sense that a lot of young people appreciate what our armed services do for us, but I wanted to do something for the students who are willing to serve.”

Bell’s journey to LHU was unique. For 24 years, she ascended corporate America, working her way up from secretarial roles to become the Operations Officer and Manager of Office Automation for what eventually became SunTrust Bank/Miami. It wasn’t until she was 37 years old that she earned her bachelor’s degree in computer science.  She went on to obtain a master’s degree in Computer Science & Information Systems.

It was then, after discovering a passion for training and her ability to get older employees who she said “swore they would never give up their typewriters” to embrace what at the time was a new technology called word processing, that Bell considered a career in teaching.

In 1987, she came across a classified ad in Computerworld advertising that Lock Haven University was looking for an instructor or assistant professor to recruit students and oversee a new program called Computer Information Science.

“I came for an interview and made the top three. The rest is history,” Bell said.

From 1988 to 2007 she taught program staples at LHU like Intro to Computers, and Systems Analysis & Design, while also developing and teaching new courses, including Advanced Microcomputer Applications, Contemporary Issues in Computing, Emerging Business Technologies and Introduction to Management Information Systems.

All along, she said it was Lock Haven University students who were the highlight of her nearly two-decade teaching career.

“I sometimes get emails from former students thanking me for helping them get to where they are,” Bell said. “I tell them I should be thanking you.”

“I did my job, but all I did was give them the tools,” she added. “They took the initiative. They applied it.  And that’s how I know I made the right decision to become a teacher.  That’s what makes it all worth it.”

It is that same appreciation she now receives from her scholarship recipients and learning of their academic successes that fuels her generosity to give back.

Not only was Bell able to share some one on one time with her first Women in Technology Scholarship recipient, a former member of LHU’s Robotics Club who graduated in 2019, but she was also able to see that student in action, when she attended an event in which her recipient was one of three LHU students who had written the code that programmed a robot to perform various tasks.

“She’s a real go getter. She’s going to do great things,” Bell said of that recipient.

She also enjoys receiving thank you letters from the students who have been awarded her scholarships.

“Thanks to your generous scholarship, I am now one step closer to achieving my goal of pursuing a career in game development,” Bell’s second Women in Technology recipient wrote in a letter to her earlier this year. “You have reduced my financial burden which motivates me and allows me to focus on my studies. I thank you for your confidence in me and your willingness to help me achieve my goals,” she added.

The Bald Eagle Battalion ROTC Scholarship is set to be awarded this fall. Its first recipient, an incoming freshman currently serving in the National Guard, was recently selected with Bell’s approval. The student was nominated by ROTC Recruiting Operations Officer Briton Orndorf.

“There are students out there who are interested in ROTC and attending Lock Haven University, but have financial obstacles making it difficult,” Orndorf said. “Thanks to [Paula], this is the first [donor-funded] scholarship I have that enables me to offer students some additional support during their first year at LHU.”

It was Bell who reached out to Orndorf expressing an interest in starting the scholarship. As a federal employee, Orndorf is unable to solicit donors for scholarships. He was, however, happy to facilitate the discussion between Bell and the LHU Foundation to help get the scholarship finalized.