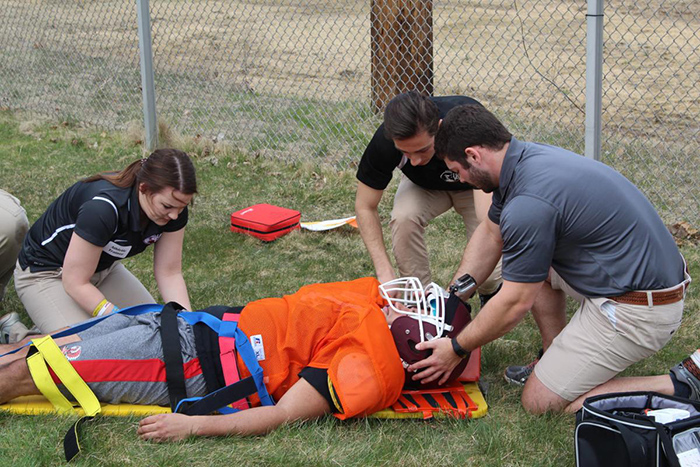 Lock Haven University students from both Clearfield and main campuses took part in a medical training event on Friday at the Simulation Center at Penn Highlands Clearfield Hospital.

During the simulation, the students were responsible for the evaluation and management of a simulated patient — a football player with a traumatic brain injury. The simulation focused on the role each provider takes as part of an interdisciplinary health care team.

LHU Athletic Training Director Eric Lippincott said it was a great way to take advantage of the new simulation center at the hospital and the partnership between Penn Highlands and the university.

“It’s a great opportunity for our students to interact with each other and to use the simulation lab,” Lippincott said.

The students were aware “something” would be happening, but had no details about specifics. Students were required to respond using their education and training.

The simulation was recorded so students and instructors could later watch and discuss how participants handled the situation. Lippincott said performance was not as important in the evaluation process as the ability to “think on your feet.”

The event started outside with two actors on a football field. After an orchestrated collision, the athletic training team was responsible for on-field care and helping emergency medicals services get the patient to the hospital.

Once inside the simulation center, the physician assistants and nurses were responsible for patient care. The students were given access to electronic medical records and performed actual care techniques on the living patient.

“This is as real as you get without being real,” Hanna added.

During the simulation, the patient’s condition quickly deteriorated to see how the students would adjust. The live actor was replaced with one the center’s “simulators.” The mannequin-like robot allowed the students to perform computer-generated scenarios designed to teach them how to act as if it were a real-life situation.

In addition to the football player, students also had to take care of several other simulators including a lady with an allergic reaction, a baby with a respiratory condition, and a male with low blood sugar. This helped create a hospital-like environment within which students could better learn.