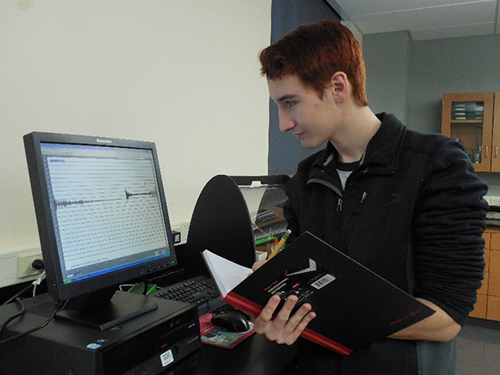 The earthquake on January 23 occurred 280 kilometers southeast of Kodiak, Alaska, producing a magnitude 7.9 earthquake at 09:31:42 Coordinated Universal Time (UTC). The earthquake waves travelling through the earth took 7 minutes and 25 seconds to reach “Sophie” in Lock Haven at 9:38:07 UTC.

“This recent magnitude 7.9 earthquake was one of the largest earthquakes I have seen recorded while attending LHU,” Caleb Royer, LHU geology major, said.

The Gulf of Alaska is a common region for subduction zone earthquakes that occur along the boundary between two tectonic plates where one plate slides underneath another plate. The earthquake epicenter for the January earthquake was just outside the subduction zone along several closely-spaced fracture zones, a location where earthquakes do not usually occur. The shaking was felt throughout southcentral Alaskan communities and as far away as Washington state.

According to the USGS, 75 million Americans in 39 states are at risk to earthquakes and the damage they cause. “The causes and effects of earthquakes and assessing earthquake impacts and hazards are an important part of the Geology curriculum, and observing earthquake waves being recorded in real-time is an added benefit to our students,” Dickson said.

Royer checks the LHU seismograph every day for earthquake recordings. “It allows me to see that earthquakes happen all over the globe, and earthquakes are picked up by Sophie on almost a daily basis,” he said.

Sign-up for LHU’s new monthly newsletter, LHU & You, to get all of your updates on The Haven and the Lock Haven community. Click here to sign up