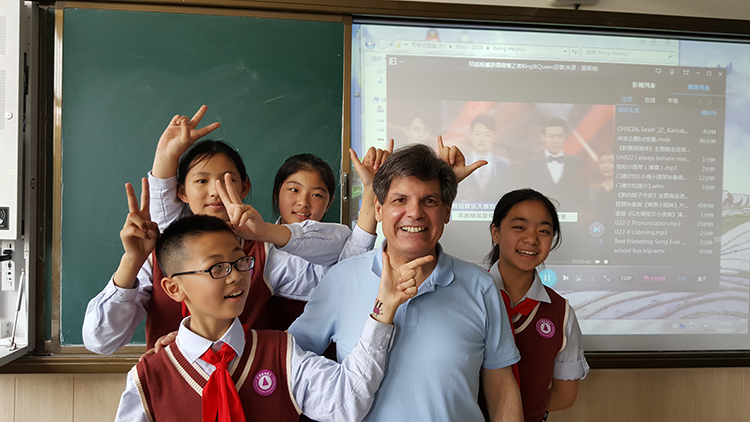 Thomas O’Neill is shown with some of his students in China.

Thomas O’Neill is not your typical Lock Haven University senior. He has returned to The Haven after more than 35 years, to complete a bachelor’s degree in psychology and interdisciplinary studies that he began in 1983. He will receive his long-awaited LHU degree, which will able him to continue his teaching career and further his pursuit of helping people, during the spring commencement ceremony on Saturday.

When O’Neill graduated from Shenandoah Valley High School in 1981, he said he could not spell or construct grammatically correct sentences due to severe dyslexia. He also had 75 percent hearing loss in both ears, was labeled as being “slow” and was “pushed through the system.” Although he said this was common at the time, he believes good teachers can and will pick up on a student’s difficulties to help them get the support they need. This belief stuck with him and has been the basis of his teaching and world travels, where he focuses on helping others. 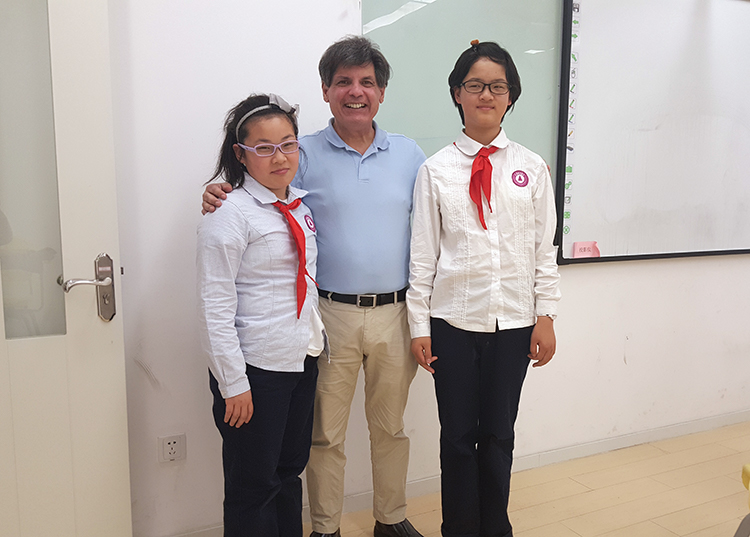 In 1983, O’Neill transferred to LHU from Keystone Junior College, but left The Haven in 1985 without earning a degree. In 1991, following his passion for teaching and helping those in need, he travelled to Ecuador to volunteer building sugarcane huts for impoverished agricultural workers. There, he also taught English to children in the hills of Duran near Guayaquil Bay.

“I found the people of Ecuador to be extremely kind,” O’Neill said. “The volunteers who worked in Ecuador did so without running water or electricity. The children and adults who lived there with us were extremely caring and eager to assist us with our daily tasks. My experiences there changed me profoundly and made me a much better person.”

In 1992 he worked at an AIDS center in Brisbane, Australia, and volunteered with Mother Theresa’s Missionary of Charity organization in Calcutta, India. “The volunteers worked with patients who were sick and dying,” O’Neill said. “I truly enjoyed the time I spent with Mother Theresa and her nuns. Before I left India, Mother Theresa told me I was a witness to the power of love.”

After returning to the United States, he was employed in a variety of different positions. He then moved back to his hometown of Shenandoah and worked as an intensive case manager with Schuylkill County mental health until his position was outsourced due to lack of county funding.

“When I got laid off from the Schuylkill County government, I worked for a student exchange program,” O’Neill said. “One of my responsibilities was finding host families for foreign exchange students and that is what led me to China. I worked as an ESL teacher from 2009 to 2018 at the Suzhou International Foreign Language School, in Suzhou, China.” 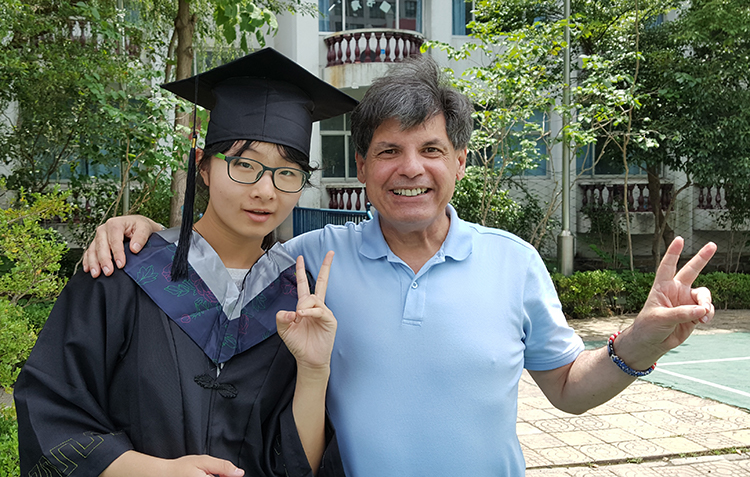 O’Neill said students, in America and around the world, all put great emphasis on getting into the right colleges and earning the right degrees to help them in their personal career goals and aspirations. “Education, after all, does provide us with boundless opportunities, and an educated society enhances the overall well-being of its nation,” he said. “If a teacher takes the time to positively impact a student's life, they are changing the world, one person at a time. That kindness will be remembered long after the lesson plans are forgotten, because it leaves an indelible imprint in one’s heart and soul.”

After being informed by his employer in China that he needed a bachelor’s degree from an accredited institution in order to continue teaching there, he decided to return to LHU.

“I quickly noticed that Lock Haven University is quite different today from when I was here 35 years ago,” he said. Despite the changes, O’Neill has completed his coursework and will earn a degree in in psychology and interdisciplinary studies, allowing him to continue his lifelong mission of personal growth and service to others.

Following graduation, O’Neill will return to his teaching career in China and plans to continue his education online in hopes of earning a master’s degree in counseling. “I will be proud to let people know that I am a graduate of Lock Haven University and I know my students in China will also benefit from my LHU education,” he said.