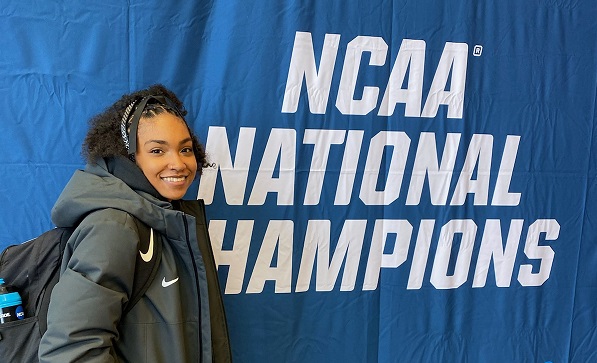 Riyana Owens, of Red Lion, is a 2021-22 recipient of Lock Haven University's (LHU) Frederick Douglass Emerging Leader Scholarship. Owens is a senior dual majoring in biology (pre-medicine) and psychology with a chemistry minor.

Outside the classroom, Owens is a standout sprinter for the LHU track team. She received the Frederick Douglass Emerging Leader Scholarship for her leadership skills both in the classroom and on the track.

"It means a lot for me to be a member of the LHU track team," Owens said. "If I had not spent the last four years on the team, I believe I would be an entirely different person. Being on the team has helped me stay focused on my academics and keeps me motivated to better myself, whether that be on or off the track."

Owens also lauded her scholarship as being pivotal in aiding her academic and athletic success. Not only because of the financial boost it provides, but the cascading impact the assistance has on her ability to manage her time and nurture her mental health.

"Receiving a scholarship is very helpful because instead of having to make time to find an off-campus job to help pay for my education and living expenses, I can spend that time and energy focusing on my studies, as well as my own personal wellbeing," Owens said.

"I would encourage all students to apply for scholarships," She added. "Having one less stressor that comes with financial uncertainty will allow students to place their time and energy on their academics and other beneficial extracurricular activities."

The family-like atmosphere at LHU is something else Owens credited as part of her success at The Haven. She said her coaches have had a tremendous impact on her development and said faculty are extremely helpful and supportive as they push her toward achieving her academic goals.

Owens said her main draw to LHU was the strength of its health science program. In the future, she aims to attend medical school to become a medical doctor, and to work in the fields of neuroscience and neurodevelopment.