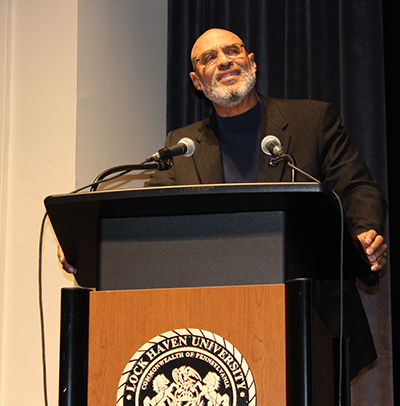 Seibles is a member of the English Department and MFA in writing faculty of Old Dominion University. He is also a teaching board member of the Muse Writers Workshop. Governor Terry McAuliffe named him Poet Laureate of Virginia, a post he began July 15, 2016. He is the author of six collections of poetry, received the PEN Oakland Josephine Miles Award, and was a finalist for the 2012 National Book Award.

Seibles, who began his talk by saying, “I love Lock Haven University,” was 13 when Martin Luther King Jr. was assassinated. He said even as a child, he knew King’s vision had a lot to do with how he was growing up. “We must begin to try to see ourselves in everyone. This will make bigotry impossible,” he said.

Seibles stressed the importance of acceptance and inclusion among all people, urging the audience to forge those unlikely bonds with others of different backgrounds, beliefs, ideas and experiences, saying “those bonds can do pretty amazing things.”

His talk was followed by a question and answer session, which included a reading of one of his recent poems, “Ghost.”

The celebration also included a reading of three poems: “Zombie Blues Villanelle,” by Seibles; “Won’t You Celebrate with Me,” by Lucille Clifton; and “I Rise,” by Maya Angelou. The poems were read by students Tariq Cannady, exploratory studies sophomore; and Jasmine Wei, health sciences freshman.

Sign-up for LHU’s new monthly newsletter, LHU & You, to get all of your updates on The Haven and the Lock Haven community. Click here to sign up