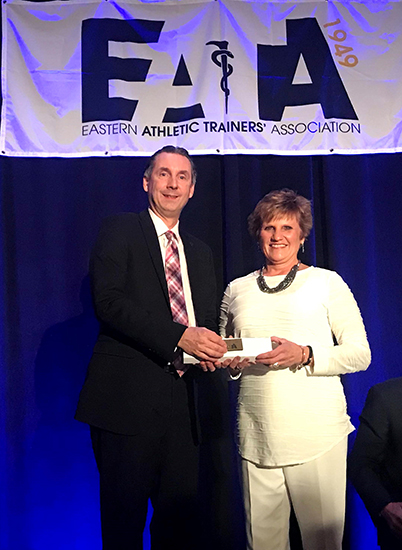 For the last three decades, Meyer has been an educator, an industry advocate and public speaker. It’s that work, along with her more than 30 years helping to transform medical care for Special Olympics (SO) athletes, that recently culminated with her induction into the Eastern Athletic Trainers’ Association (EATA) ’49 Club.

The EATA promotes and advances athletic training through education, scholarship, research funding and awards. The EATA consists of more than 8,000 athletic trainers. Less than 100 people have been inducted into the ’49 Club, which is considered the organization’s hall of fame and greatest honor.

“I had many major influences as a student at Lock Haven, but, hands down, Dave Tomasi was my greatest mentor,” Meyer said.

For the first nine years of her career, Meyer was a high school health and physical education teacher and athletic trainer. It was at Bellefonte High School that she met Yvette Ingram, who gravitated toward athletic training before going onto graduate from Lock Haven University in 1992. Ingram has been an athletic trainer and professor at LHU for the past 22 years. She is also a former president of the Pennsylvania Athletic Trainers’ Society (PATS). Like Meyer, Ingram lauded Tomasi for the sense of volunteerism and service to others that he instilled in his students — a culture of service that carries on to this day.

“Athletic Trainers, especially at Lock Haven University are a family and we all have our roots that go back to a few early pioneers. Dave Tomasi and Linda Platt-Meyer are two of those pioneers,” Ingram said.

In 1987, Meyer’s friend, 1985 LHU special education graduate Nora O’Sullivan Mason, became involved with Special Olympics Pennsylvania (SOPA). Mason wanted her SO coaches to have the proper knowledge of first aid and training and conditioning for athletes with intellectual disabilities (ID). She reached out to Meyer, asking her to do workshops to educate coaches on proper care and training techniques.

Today, all SOPA competitions have multi-disciplinary healthcare teams present at every state-level event. The SOPA model has also been shared across the country and other states are now adopting this approach.

True to the nature of volunteerism and service learned from Tomasi, all of the work Meyer has done with SOPA has been voluntary. She has also spent the last 27 years teaching at the college level, including 14 years at Duquesne University where, in 1992, she teamed up with 1987 LHU graduate Barry McGlumphy and others to establish Duquesne University’s nationally recognized athletic training education program. In 2007, McGlumphy recruited Meyer to join him at California University of Pennsylvania, where she has taught exercise science for the last 13 years.

McGlumphy and Meyer were both inducted into the PATS Hall of Fame in 2013, along with 1983 LHU graduate Julie Ramsey Emrhein.