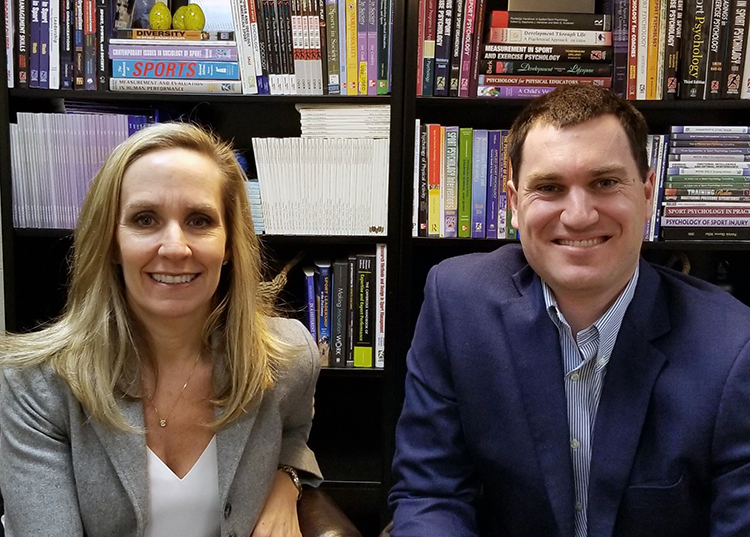 Research performed by Drs. Patricia Lally and Brian Foster recently was chosen to receive a grant through the NCAA Innovations in Research and Practice Grant Program.

Earlier this spring, six research teams, including one from Lock Haven University, were chosen to receive a grant through the NCAA Innovations in Research and Practice Grant Program, designed to enhance college athletes’ psychosocial well-being and mental health.

Drs. Brian Foster and Patricia Lally’s research on online social media literacy for student-athletes was among those chosen for funding by the grant. A panel reviewed 87 proposals and the committee funded grants in amounts ranging from $6,700 to $25,000, totaling $100,000 across all six teams.

According to the NCAA, the program is aimed at funding projects that will bring tangible benefits to college athletes when used by individuals or by NCAA member schools’ athletics departments.

“We are honored to have been selected by the NCAA to receive an Innovation in Research and Practice grant,” Foster said. “With the support of the NCAA and Lock Haven Athletics, we look forward to developing and testing our program over the next several months before presenting our findings at the NCAA Convention.”

According to the LHU team’s findings, up to 40 percent of college athletes have received no social media training, and those who have received training often have reported being unsatisfied.

To address the issue, the team will create an online social media literacy training program, consisting of four self-paced modules that will highlight showcasing one’s character, assessing message credibility, enriching sport performance and managing cyberbullying and the program is planned to be pilot tested with LHU student-athletes this fall.

“Our goal is to provide the NCAA membership with an effective standardized program to share with institutions nationwide for the benefit of all student-athletes,” Foster said.

This is the sixth year of the NCAA Innovations in Research and Practice Grant Program and the six teams will present their findings in January at the NCAA Convention in Anaheim, California.