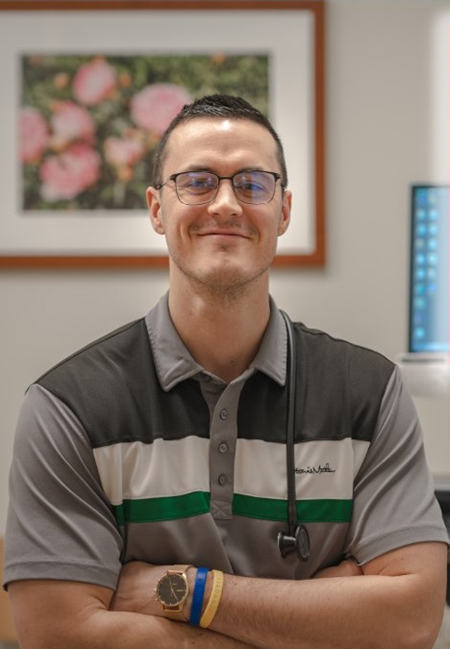 Colby Welshans, a 2014 graduate of Lock Haven University’s physician assistant program, is one of several LHU alumni employed by UPMC Outpatient Center in McElhattan. His path to medicine, however, was a little different than most.

The Mill Hall native graduated from Central Mountain High School in 2005 and went on to receive a bachelor’s degree in marketing from Penn State University in 2009. He completed an internship with the State College Spikes and then a temporary stint as a Lock Haven University admissions counselor.

It was after working for LHU that Welshans determined he wanted a new challenge; to find it, he decided to enroll in what he calls “Lock Haven University’s well-renowned PA program.”

His inspiration to pursue medicine came from his grandfather who was an EMT for a local fire hall. His childhood best friend, Eli Hanna, also was a PA student at LHU at that time and encouraged Welshans to enroll.

He began the two-year program at LHU in 2012, learning from what he said are “knowledgeable and approachable faculty who are not only great teachers, but have actually practiced medicine throughout the years.”

The first year of the program was “intense,” classroom-based learning, according to Welshans.

“It forced me to work hard, but it also taught me many of the things I was going to need to know about medicine,” he added.

Year two of the program consisted of six clinical rotations, some of which were mandatory, and others he was able to select based on interest. The rotations allowed him to gain hands-on experience in multiple areas of medicine, including family medicine, orthopedics, cardiology, general surgery and senior living.

“The rotations are a cool experience,” Welshans said. “You get to see many aspects of medicine in less than a year and it really helps you determine where you want to go and what type of medicine you want to practice.”

He graduated in 2014, and after spending a year with Mid-State Occupational Health, handling physicals and workers’ compensation injuries for PENNDOT, he transitioned to family medicine.

Welshans recalled a time when a new patient came to see him — the man was fit, exercised daily and at first glance, appeared healthy. But upon examining the patient, he felt it was important that this person immediately see a specialist.

After meeting with a cardiologist based on Welshans’ referral, the patient was admitted to the hospital on the spot with a potentially serious heart issue and doctors ultimately were able to save the patient from suffering an acute heart attack.

“Every time I see that patient now, he’s always very appreciative and thanks me a thousand times,” Welshans said. “Hearing someone say, ‘thank you, you saved my life’ — that’s a really good feeling.”

Not only is Welshans thrilled to be working in a field of medicine that he enjoys, with alumni and coworkers who he also calls friends, but he is extremely honored to be able to practice medicine in the same area that he grew up in.

“It means a lot to be able to gain the trust of the community and let them know that we’re here to serve their health needs,” Welshans said. “Practicing medicine in a small town is interesting. This is an area where everybody knows everybody so I’m always finding that I know so many of my patients through someone else. It really is awesome to be able to serve my community.”